Home »Breast diseases»Seven men in black – a mastectomy in 1811

Dubois placed me upon the Mattress, & spread a cambric handkerchief upon my face. It was transparent, however, & I saw, through it, that the Bed stead was instantly surrounded by the 7 men & my nurse.

I refused to be held; but when, Bright through the cambric, I saw the glitter of polished Steel – I closed my Eyes. I would not trust to convulsive fear the sight of the terrible incision. Yet – when the dreadful steel was plunged into the breast – cutting through veins – arteries – flesh – nerves – I needed no injunctions not to restrain my cries. I began a scream that lasted unintermittingly during the whole time of the incision – & I almost marvel that it rings not in my Ears still? so excruciating was the agony.

When the wound was made, & the instrument was withdrawn, the pain seemed undiminished, for the air that suddenly rushed into those delicate parts felt like a mass of minute but sharp & forked poniards, that were tearing the edges of the wound.

I concluded the operation was over – Oh no! presently the terrible cutting was renewed – & worse than ever, to separate the bottom, the foundation of this dreadful gland from the parts to which it adhered – Again all description would be baffled – yet again all was not over, – Dr. Larry rested but his own hand, & – Oh heaven! – I then felt the knife (rack)ling against the breast bone – scraping it!

Afterwards the doctors lift her up to put her to bed

& I then saw my good Dr. Larry, pale nearly as myself, his face streaked with blood, & its expression depicting grief, apprehension, & almost horrour.

Fanny Burney, from a letter to her sister Esther describing a mastectomy without anaesthetic.

Fanny (Frances) Burney (1752-1840) was a successful novelist in the 18th century, widely thought to have prepared the ground for other female novelists. Her first novel remains her best known; Evelina (1778) was first published anonymously, a comic and satirical coming-of-age tale from the point of view of a 17 year-old woman of privileged family. Her writing influenced Jane Austen (the phrase ‘Pride and Prejudice’ may have been taken from Cecilia) and many others beyond. However her diaries and letters are also a rich source.

Her description of the mastectomy speaks for itself. It is not clear whether the operation was undertaken for cancer or other pathology. In advance she wrote her will, and farewell letters to her husband and son. She had a pre-med of wine cordial, but in 1811 there were no anaesthetics. The operation was undertaken when she was 59 and she lived on a further 29 years. The letter to her sister was written 9 months after the event. 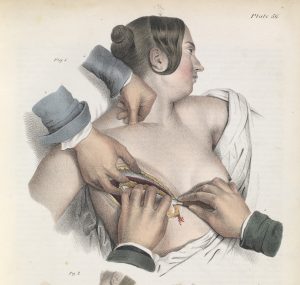 Surgery for the removal of the mammary gland. (Wellcome Images) CC BY 4.0 licence

Nothing is impossible for the man who doesn’t have to do it himself.